It has been a week now since the California Supreme Court issued its decision in Brinker Restaurant Corp. v. Superior Court. I’ve been getting a lot of questions, and have spoken on the topic a few times, and thought a couple of charts illustrating the Court’s holding would assist in understanding the decision. For a more general discussion of the Brinker decision, please see my previous article.

I’ve created this chart to help illustrate this point: 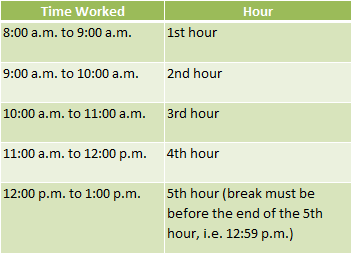 Another issue in the case was Brinker’s policy of “early lunching.” Early lunching is when employers allow the employees to take their meal break within the first hour or two of arriving for work. Once the employee is given this first meal period, then they would continue to work for six, seven, eight, or more hours without an additional meal break. The Court rejected Plaintiff’s argument that this policy violated the law. The Plaintiff argued that the law required employers had a duty to provide meal breaks on a “rolling five” hour basis, or every five hours.

Here is a chart that provides an example of an early lunching practice: Before employers begin to employ an early lunching policy, they should do so with caution and some guidance. As Court cautioned employers that: “in the context of an eight-hour shift, ‘[a]s

a general matter,’ one rest break should fall on either side of the meal break. Shorter or longer shifts and other factors that render such scheduling impracticable may alter this general rule.”

In regards to when during the shift rest breaks should be taken, the Court held that “the only constraint of timing is that rest breaks must fall in the middle of work periods ‘insofar as practicable.’” The Court stopped short of explaining what qualifies as “insofar as practicable”, and employers should closely analyze whether they may deviate from this general principle.